Abingdon Lock is steeped in history, with the original weir reputedly having been built by the monks of Abingdon Abbey during the 10th century. It is 7.38 km (4.59 mi) downstream from Sandford Lock and 4.15 km (2.58 mi) upstream from Culham Lock.

At the beginning of 2013, Abingdon Lock underwent a facelift as part of the Environment Agency’s ongoing commitment to keeping the river's locks in good condition for boaters. 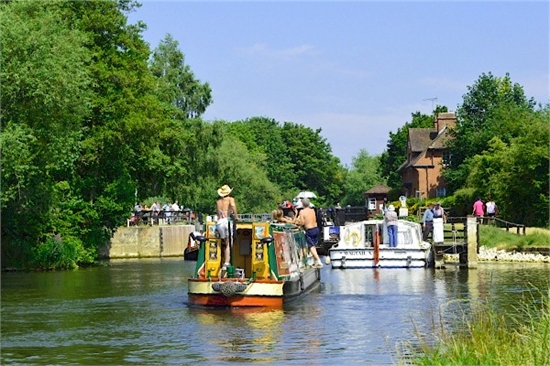 It is a pleasure to walk around this picturesque lock, watching vessels such as pleasure cruisers, narrow boats and long boats pass through.

Immediately above the weir, towards Abingdon, is the channel built by the monks of Abingdon Abbey in the 10th century to facilitate the transport of supplies and mill water to the abbey.

At the lock-keeper's house, which dates back to 1928 according to a tablet above the front door, ice creams and other refreshments are available during the summer.

A short walk away, along the water-meadows and past the popular visitor moorings is Abingdon Bridge, which began life as a stone bridge in 1416.

Also not far from the lock lies Andersey Island. It is created by the main river and the Swift Ditch, which used to be the primary navigation channel until Abingdon Lock was built. The Swift Ditch is crossed by three bridges, one of which is the mediaeval Culham Bridge.

If you fancy a longer walk, you may want to consider part of the Thames Path. It crosses the river at Abingdon Lock, and you can either follow it upstream on the western bank all the way to Sandford Lock, or along the eastern bank via Culham Bridge to Culham Lock.