The River Thames starts life in the west of England near the ancient roman town of Cirencester. Durings its over 200 mile journey it passes through some of the most beautiful countryside in England and it runs close to many of the most historical sites in the country.

From Gloucestershire the Thames runs through Wiltshire, Oxfordshire, Berkshire, Buckinghamshire, and on into Middlesex and Surrey, before entering London and finally reaching the sea in Essex.

Whilst Oxford, with its famous seats of learning, Henley-on-Thames, Marlow, Maidenhead and Reading all lie on the river itself, towns further away such as Swindon, Burford, Newbury, Thame, Wokingham, High Wycombe and Ascot can also claim to have had their history influenced by the course of this great river. 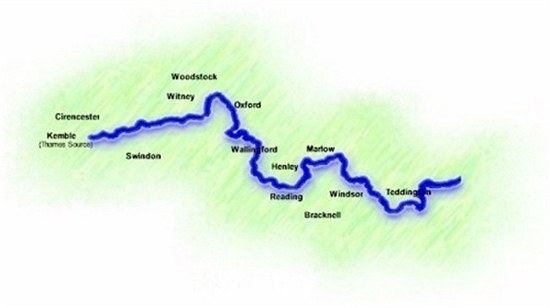 Most people will have a gut feel for what constitutes the Thames Valley, and in many cases the perceived area will be much larger than the actual valley stretching north and south of the river. Applying strictly topographical criteria, the Thames Valley would be considerably smaller than the area we have chosen to include in this guide.

How did we arrive at our definition of the Thames Valley? In essence, we feel most visitors to the area are looking to enjoy a day out or a holiday in the countryside, walking, sightseeing, relaxation, the lot.

Along its course, the River Thames touches some of the most famous and inspiring areas of the country such as the Cotswolds, the Vale of the White Horse, the Chilterns and the Hundreds, and we decided not to be rigid with respect to the boundaries, but to inform prospective visitors of interesting aspects throughout the region.

As a rough guideline, the core region we cover in the Thames Valley Guide runs from the the source in the west to the M25 in the east, and encompasses approximately 15 miles either side of the river along the way. However, you may also find information on points of interest beyond this area but within commutable distance to the Thames Valley.