Reading, which dates back as a settlement to the 8th century, is now one of the UK’s top ten retail destinations. It is located at the confluence of the Thames and Kennet rivers, close to the M4.

With its enticing blend of modern as well as many historic parts, trendy scene and beautiful surrounding countryside, Reading is a good destination for a variety of purposes at any time of the year. 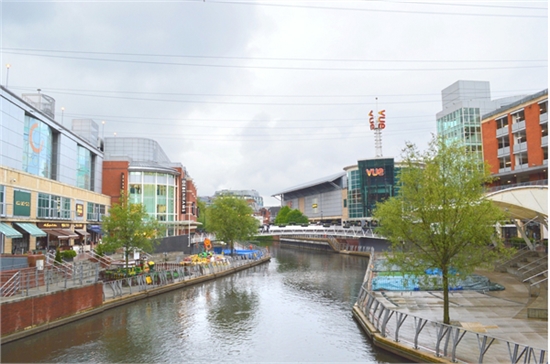 Whilst Reading is well known for its extensive shopping facilities, from the large Oracle mall to cozy shops in small alleyways, it also offers a multitude of other activities: the Museum of Reading contains many interesting historic details, such as a full-sized replica of the Bayeaux Tapestry detailing the story of William the Conqueror and Harold, Earl of Wessex, who led the Norman and Saxon armies in 1066.

In the centre of Reading is Forbury Gardens, a park recently restored to its former Victorian glory. Nearby are the ruined walls of the medieval Reading Abbey, founded by Henry the First.

The Kennet and Avon canal runs through the town and the towpaths are a great place to see the town and watch the barges make their way along the canal.

And for all music and festival fans, the yearly Reading festival of course is a must: for more than two decades, well-known bands such as Kasabian, Foo Fighter or The Muse have been giving it their bes

Reading just has to be on the list of places combining excellent shopping in modern surroundings with plenty of opportunity to sit and relax. Visitors often travel some distance just to browse and shop in the Oracle, a large, modern mall right by the Kennet and Avon Canal where you will also find a cinema and many nice bars and restaurants.

On the other side of the Oracle lies a generous pedestrian zone with lots of facilities from banks to shops, some of which are tucked away in historic alley ways. In a nutshell, you can easily spend an entire day in Reading just shopping alone!

The Ballad of Reading Gaol is a poem by Oscar Wilde, written in 1897, after his release from Reading Gaol, where he had been incarcerated after being convicted of homosexual offences and sentenced to two years' hard labour.

The River Thames offers long walks along its banks, and plenty of beautiful countryside as well as historic villages and interesting neighbouring towns are within a few minutes drive. The possible destinations are too numerous to list, but here a few perhaps lesser known suggestions:

Basildon Park is an 18th century stately home owned by the National Trust approximately 14 Km from Reading near Goring on Thames, situated in a large park near the river. Inside, it has a collection of art works and furniture.

Silchester, about 20 minutes drive from Reading, was once the ancient Roman town of Calleva Atrebatum. All that remains are the ruined amphitheatre and town walls but it makes for an interesting place for a visit.

Mapledurham House is an Elizabethan manor house located by the river near Reading and is set inside a large estate containing, in addition, a watermill.

view all Towns and Villages